Can Air Conditioning Be Added to My Older House? 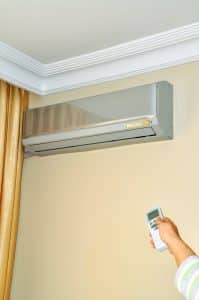 Central air conditioning first entered homes in the 1920s. However, these were expensive luxury items that only the wealthiest could afford. It wasnbt until the 1950s and the invention of the window air conditioning unit that air conditioning started to become widespread. In the 1960s, central air conditioning started to become a standard part of new home construction: ductwork was designed to be placed between walls and in the attic so cooled air from an evaporator and air handler could travel to the different rooms.
However, if you live a home that was built before central heating and cooling became commonplace (and there are plenty of these older homes here in Western North Carolina), there wonbt be space for ductwork to allow for standard central coolingbnot unless you have large house of the home ripped out. Will you just have to rely on window air units? Webre sure you wonbt want that, since window units are inefficient, look unpleasant, and can add a security risk to your home.
But there is a way to add central air conditioning to an older home without making significant changes to it: The answer is ductless mini split systems. Installing a ductless mini split system wonbt require doing major remodeling work to install ducts wherever installers can find a place to squeeze them in. Ductless systems combine the power and convenience of central air conditioning with the small size and direct cooling of a window unit.

A ductless mini split system is a type of heat pump (which means it can also provide heating, but webre going to focus on cooling mode now; itbs summer, after all!) that operates through a series of small air handler units inside a home rather than a single large air handler and evaporator unit.
The conventional AC has one outdoor unit which hooks up to one indoor unit. The indoor unit sends cooled air into the ductwork laid into the home. But a ductless mini split system has mini-air handlers placed around the house. Theybre mounted up on exterior walls, usually over a window or door to the outside, and connect to the outdoor unit through cables and wires that run through 3b holes in the wall behind the units.
Each unit contains a blower fan and evaporator coil so it can send cooled air straight into the living space. Itbs like a window unit, except it doesnbt block up a window, is placed where itbs less obtrusive, and works through a central outdoor unit for superior performance. Each outdoor unit can run up to four air handlers.
Aside from the advantage of providing central cooling to homes that couldnbt otherwise enjoy it, ductless mini split heat pumps have other advantages: they use less energy than standard central ACs, provide zone cooling since each unit can be run separately, and help to lower the amount of dust blown around a house.
Do you want to learn more about the possibilities of a ductless mini split system in Hendersonville, NC for your older home? Then we recommend getting in contact with our HVAC team to learn more and schedule service.

We Go Above & Beyond

At Comfort Central, our goal is not to have just one-time customers - we want to earn customers for life, so there’s never a question of whom to call.